The page is a short story that envisions a Regional and Global governance system that could thrive on negative growth in human-activity, toward a day in the future when the human Ecological Footprint could be sustained within the renewing resources of the Gaian systems of.  Members of the Blue Planet Club have indicated that they would prefer the future system of government presented on this page to the competitive nationalistic governance systems of today that fail to recognize Limits To Growth.

We invite you to join the club.

Who knows what can happen in our changing world of rapid communications, and today’s young generations now recognize that Business As Usual (BAU) is a grave threat to their future well-being.

Today there is no governing body capable of avoiding the collapse of civilization.  The collapse was forecast several decades ago.  At that time national leaders who understood the human predicament acknowledged that they could not stop it.  Even the United Nations (UN) could not stop it.  Our GROWTH oriented capitalist-driven governments simply cannot respond to apparent ‘limits to growth’ because our elected leaders feel that they would be thrown out of office by voters if they were to begin implementation of the social and economic changes needed to respond to today’s biophysical and energy realities. There is a section in the appendix providing reference material about the information in this paragraph under, Limits to Growth.

There are other compounding issues:

§ Human population is likely far beyond Earth’s carrying capacity.  There are still some cultures and religions that forester large families.
§ Complex interactions in trade and commerce prevent any individual national government from acting alone.  The UN cannot act as a global government because a few large nations have veto powers.
§ It is most unlikely that elected politicians would have the technical expertise to make wise decisions in all of the diverse areas that comprise both ‘civilization’ and the dynamic systems of Gaia - the cradle of all life.
§ The driver of GROWTH: The US$ is the world primary reserve currency.

In the US primary money creation is referred to as ‘debt based’ money wherein commercial banks create new money from the interest paid on loans.  As a result, the money supply is always expanding, as explained by Prof. John McMurtry in his book, The Cancer State of Capitalism  This is also explained in a web booklet,  to http://gaiapc.ca/PJ/3a-MCP.pdf.

We cannot forecast whether today’s economic system will collapse first or if ecological deterioration will simply end the possibility of human life on our small Blue Planet.  As we personally witness the evidence of global warming, many of us feel a growing sense of grief and anxiety.

The Blue Planet Club is based on the hope that prior to collapse of either the economic system or the ecological system, there will be a window of opportunity for a convergence of proactive global NGOs (Non-Governmental Organizations) to begin the assembly of a constitution, a cornerstone document for a viable system of global governance. But what would this elephant look like?

As in the parable of The Blind Men and the Elephant, most of today’s leading NGO rivers of change tend to focus on only one part of the elephant, their specific area of expertise, and have yet to form an alliance, a holistic group to define the whole elephant and its needs.  To encourage these NGO rivers of change to converge into a sea-change in the way human affairs are managed on our small Blue Planet, in this document we present an overview of a possible form of Blue Planet Governance that can act as prototype model.

This sketch is rooted in decades of exploring the works of dozens of NGOs and wise philosophers.  It is within these groups that the Blue Planet Club would find the expertise needed to develop the interactive building blocks of the new form while today’s Titanic model continues to serve as a usable platform for development of a regional/global life-boat infrastructure.  NGOs need to provide appropriate expertise in the study of: sociology; alternate currencies; alternate economics; ecological footprint and other real-wealth measurements; biodiversity; energy - both fossil and renewable sources; human population dynamics; atmospheric science; social science; localization; eco-psychology and aboriginal 7thgenerational thinking.  Leaders in these disparate but interrelated fields of thought would be needed to proceed within the spirit of post-normal speculation.  Expertise in development of international standards will also be needed.  As we proceed, it is worthwhile to recall another quote by Albert Einstein:

We cannot solve problems with the same thinking that created them. 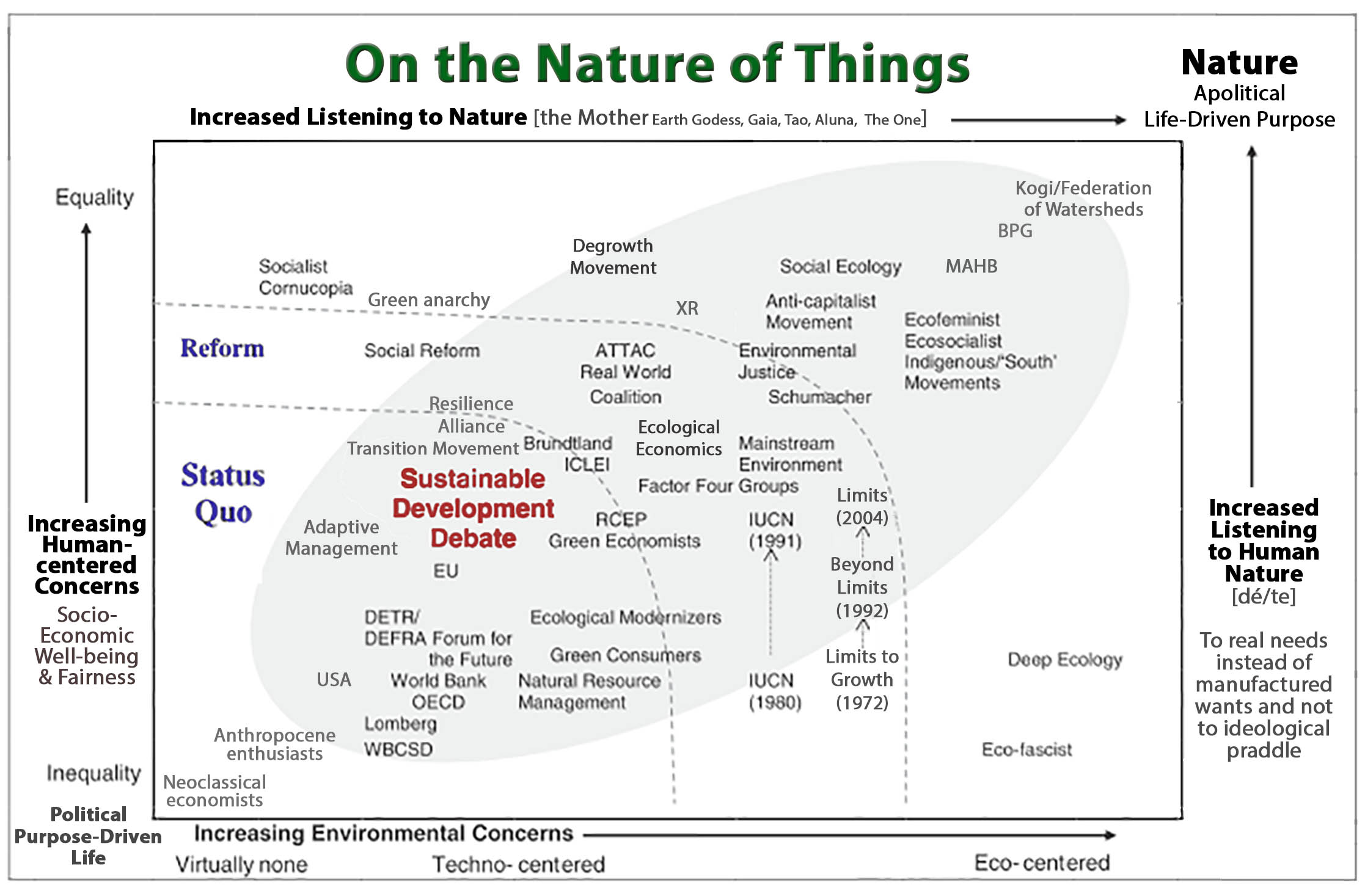 Below is a more detailed view of the United Regions

The first purpose of the BPClub is to communicate with leaders of key NGOs to encourage them to reach out to other NGOs to work together to weave their individual threads in to the fabric of a shadow United Regions and to begin development of the documentation needed to define the role of each of the administrative segments of the United Regions (UR).

The second purpose of the BPClub is to serve as an attractor, a place where the general public can express their growing anxiety and ecological grief by showing support for the concept of a better world, such as Blue Planet Governance.

BPClub membership is based on a simple endorsement of the statement that…:
I prefer the basic concept of Blue Planet Governance to what exists today.

You can go to the endorsement page now or continue reading first:

The BPClub makes no claim that a non-chaotic paradigm change toward the Blue Planet Governance scenario can be made.  We simply present for readers' consideration a prototype model, an envisioned system of global and regional governance that would be dynamically responsive to real-world data.  This proposal suggests a prototype for those of the BPGA who will develop the model's details.

When they have refined the model, they can then present this concept to the many regions of the world that are fertile for change today.  Perhaps some of them will initiate implementation of the processes in parallel with the Titanic system for a while.

As envisioned, the Blue Planet Governance model remains as close as systemically possible to government structures that exist today, as recommended by the late cyberneticist Stafford Beer.  The envisioned model is rooted in the study of human-nature, dynamic systems, energy, and the state of the natural world. It recognizes the need for a form of biophysical economics that can accommodate a realistic definition of wealth - Real Wealth, as penned by Riane Eisler: Real Wealth is a measurement of a robust ecology and of the general health and happiness of the people!

Details of the envisioned Blue Planet Governance presented here are drawn from Section 4, Envisioning in the booklet Paradigm Junction.  The opening sections provide the social, political and technical reasons for the suggested model.  Another chapter describes how to develop and implement the needed form of biophysical economics and how to create a digital form of money that operates like today’s debit card.

1a:  Energy is expended to make all things happen;

1b:  Any complex trading society requires a form of money to facilitate the exchange of goods and services.

1c:  Therefore, monetary flow control can be seen as a regulator of human-activity.

(Today this key regulator is in the hands of growth-driven commercial banks).

2: You cannot manage what you do not measure.

4: The concept of human rights is a dangerous myth unless it is cradled in human responsibilities -
including responsible procreation.

One primary requirement of the UR is to quantify the biophysical and social elements that represent real wealth as measured within the global commons and in each region.  The measurement of Real Wealth of each region becomes the commodity basis for that region’s money supply.  This brings population into the equation of wealth per capita, making each region’s gross human population a regional concern.

While the future is unknown it is largely shaped by events of the past.  Today's and tomorrow's events will represent the past as seen from 50 years in the future. It can be worthwhile to speculate on possible futures. Here are a few: